In just a few short hours I will be getting on a train with no idea where I’m going or when I’ll be back. I’ve traveled enough at this point that this knowledge no longer terrifies but thrills me. It’s incredibly freeing to not know the details; to have a starting point and just go where the wind takes you afterwards. That is exactly my game plan (or lack thereof) for the entire month of August.

I am 99% packed at the moment and I have to say, it’s so much more relaxing traveling by train compared to flying. First off, I can bring a bag of snacks and food in addition to my backpack without having to worry about the airline making some excuse and charging me for it. This also means that I can buy as many gifts and souvenirs as I want without worrying about how I’m going to get it home.

Second, you don’t have to separate out your liquids which is just so much more convenient. I like to have three small pouches with toiletries, shower, and makeup stuff. Having to separate my liquids adds another pouch to that list and scatters all of my neatly organized categories throughout my backpack.

Finally, it’s so much nicer just arriving at the station and getting on the train compared to the journey out to the airport (I usually use Frankfurt Hahn which is a 2 hour bus away), standing in security, queuing to board, and then fighting your way off the plane once you’ve landed. The beautiful scenery and unprocessed air are big plusses towards train travel too.

Well, like I mentioned in my Summer Ticket post, I want to make the most of my summer ticket so I will be hitting the perimeters(ish) of Germany. I will for sure be starting in Munich tomorrow and I want to hit Hamburg, Cologne and Dusseldorf as well.

I’ve actually lived in Berlin before for 3 months so that’s off the list this time. Heidelberg and everything in that region will be for another trip but other than that, I have no idea what I’m doing or where I’m going. Feel free to drop me some suggestions in the comment section.

I have to be back by September for classes but other than that, I’m as free as the wind. I will be posting about each city or region that I visit as I go so make sure to follow me either here via email or on your favorite social media (links at the bottom of the page). Looking forward to sharing this adventure with you! 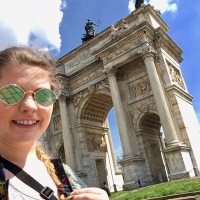 View from my front door. 😍
When you sit on a pair of photos for a week cause you can’t make up your mind which one you like better to put first on Insta. 😅 Please tell me I’m not the only one who does this.
Yeaaaaa... I’m ready for some sunshine. T-6 days to St Thomas and T-13 to Fiji!
Was excited about my outfit so I decided to document it. 😋
🌄
It snowed today which meant no one showed up to work which MEANT that I got the bathroom to myself to get this selfie. 😜
My Tweets
%d bloggers like this: